A cult sport association was founded in the 1950s under the name of Partizan and thousands of youths have grown up with this sport society since its establishment, making it an important element in both the spatial and social context of Mostar.
The site is roughly 2500 smq and sits on high ground on the eastern bank of the Neretva, in a very central position close to the Stari Most. The sportsground and its surroundings are in a rundown state, although huge potential still lies in its ruined features. Part of the plot are also buildings that prior to the war were used as offices, changing rooms and other facilities for the sports area.
A set of goals, in terms of physically tangible change, and of objectives, short and long-term effects, which are the expected result of the former, can be defined for the process:
Objectives
1_ Reintroduce and expand a former public facility to the city. Be an example for reusing, renewing and restoring historical places in Mostar and the whole of Bosnia and Herzegovina.
2_ Revitalize Partizan as a society with long-term goals. To improve the involved NGOs’ work and allow it to grow as a focal point for the community.

Goals
1_ Restore a place of collective memory. Addressing a renewed sense of community both physically and psychologically.
2_ Activate a social agenda. In terms of cultural benefits – societal values, sports, arts, entertainment, etc.. – through on a positive outlook and a bottom-up approach.
3_ Empower the community. Promoting social interaction, improving children’s lives through sports and boosting the community through the refurbishment of a public space.
4_ Improving international awareness for the city’s struggle to redevelop. Through national and international media the project aims at raising awareness on the case of Bosnia & Herzegovina and specifically of Mostar.
5_ Promoting international cooperation. Establishing a new network of international actors from different fields of work as a means of enhancing ties between different local realities.
6_ Valorising the potential of neglected spaces. Partizan is just one of Mostar’s unique sites to hold unparalleled potential and the project is also a way of bringing all of them under the spotlight.

This is an elaborate operation that requires considerable investment and, because of this and reasons connected to current feasibility of the project, we are convinced that even a small start, and a series of focused temporary events, can trigger bigger processes. We have the goal of going beyond the temporariness of such interventions. The work on this site is a paradigmatic example of what can be done with this potential by using few resources: the project finds its guiding principle in a low-key, bottom-up approach, that seeks to tackle the complexities of the situation through a series of small-scale interventions and aims at fostering a process of physical and social reconciliation within the community.
The driving idea behind these principles is that sustainability is not only economic but also, and especially, social – an aware approach to a sustainable accomplishment, which is achieved with a participatory process. This design is conveyed through a series of unexpected elements that produce relevant social effects, which all kinds of users – children, adults and elderly – can benefit from. We have thought of a schematic plan, inspired by many different references, for this site: 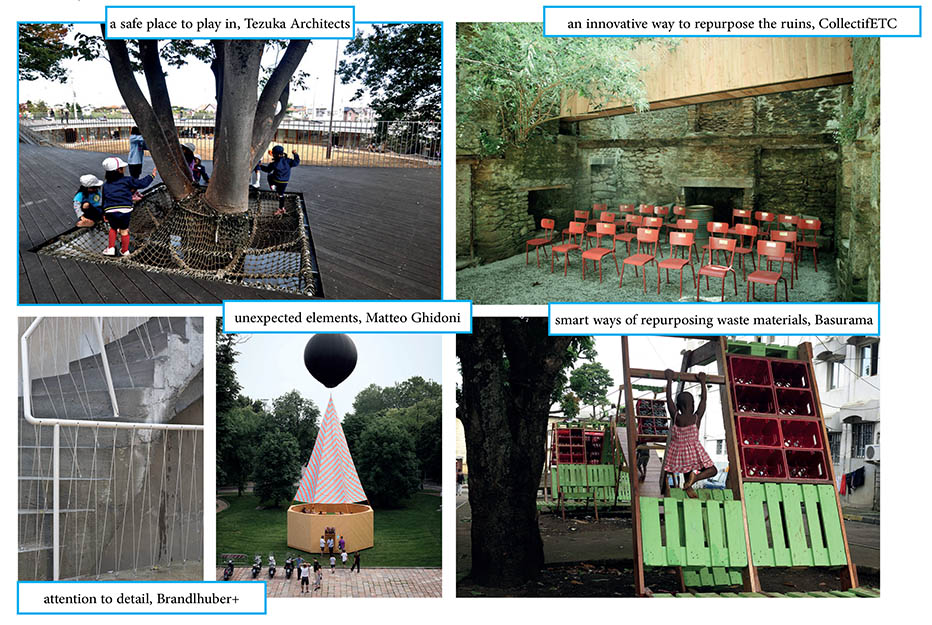 Bearing in mind Thinking BiH’s set of goals and objectives, its conditions and context, the first event has been a success. Since April, Partizan’s team, with the help of Rustic Pathways, private donations and volounteer work from the community, has been able to clear the superficial but fast-growing vegetation that covered the site and give a fresh new look to Partizan.
More than one hundred children from local schools and foreign exchange programs have successfully managed to take part in the activities and have radically changed the site’s appearance and accessibility.
These initial cleaning operations then leaded to the first Partizan Party!
The event took place during the last weekend of August (30.08.19 – 01.09.19) and its programme was organised as to showcase many different activities that can take place on the site: football matches organised by Dzevad ‘Piga’ Habibija – president of Sportska škola MAS and Partizan – karate lessons, a percussion session, a live performance for children, an architectural workshop for children age 9 to 13 held by Senada Demirović – founder of Urban House IDEAA – and grup, an international collective of architects from Berlin and, finally, the opening ceremony and party for the 2019 edition of the Street Art Festival in Mostar.
grup, also designed a site-specific installation for the event, while Mane Mei, from Zagreb, worked on-site at a partecipated mural art installation done with the sponsorship of Baumit and the help of local kids. 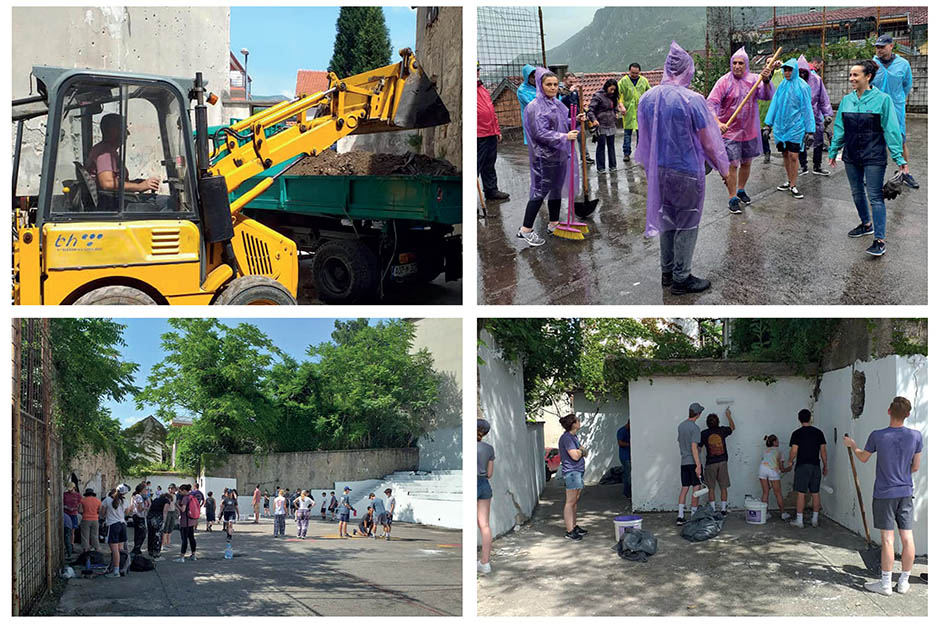 Based on previous experiences by the different parties involved and on our different backgrounds, we are sure that such an initiative would trigger a very much needed
community empowerment process. There are many similar examples of associations who have started successful processes in this way across the world.
The main intention of Partizan in Mostar. Thinking BiH is to demonstrate how positive change can be triggered through participation of locals and non-locals in the reappropriation process of neglected spaces. The project, still in its preliminary phase, aims at encouraging a future consolidated development. It seeks to demonstrate
how any place can reach its full potential through a series of actions that take place gradually within a broader phased process. The number of actions before we
reach full strength is open-end and welcomes proposals from anyone who is interested in participating. Partizan will once again become a public space for active interaction
of people through cultural exchange. The reuse of Partizan, whilst respecting and enhancing its historical value, will stand out for its positive impact on the area: a
place of aggregation, sharing and gathering accessible to all.